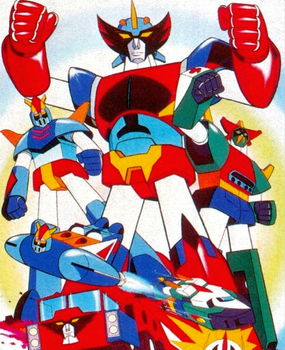 Super Combining Magical Robot Ginguiser (Chogattai Majutsu Robot Ginguiser) is a Super Robot anime about four circus kids (Gorou, Torajirou, Santa and Michi) who each pilot 3 magic powered robots (and a jet). With the help of its powers, they fight to protect the Earth from the Sazorian Empire, a race of brightly colored animal-human hybrids who plan to Take Over the World.

At first a rather generic and run-of-the-mill robot anime of the 70's produced by Ashi Productions and animated by Nippon Animation (much like Ashi's previous series Blocker Corps), it would have been completely forgotten if it wasn't for its recent fame among the mecha community (mainly 4chan's /m/), where, due to its confusingly flashy and low budget visuals, the series has mutated into an eldritch abomination.