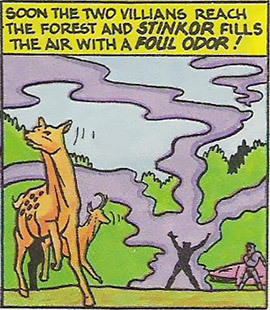 Beast Boy: I don't smell anything.
Raven: [disgusted] Don't smell it? I can see it!
Cyborg: [horrified] It's thick enough to cut through! [snips off a piece of the stench, which falls on the floor]
— Teen Titans Go!, "Hot Garbage"
Advertisement:

Viewers of animationland can only experience things through two senses: sight and sound. So what do you do when you want to make it clear that something smells? Make the smell visible!

Smells are even colour coded. Bad smells are usually green, yellow, or brown, and are sometimes accompanied by flies, while nice smells are usually pink, blue, or possibly brown if the scent is coming from food. Burnt smells are given a charcoal grey colour, while coffee is given a trail of steam. Whatever the colour, the smell is usually depicted either as a trail of vapour or as little wiggly lines or "waftarons".

The Rule of Perception is the whole reason for this trope's existence. If the audience isn't aware of something, it doesn't exist. Therefore in order for a smell to exist, it has to be able to be seen or heard by the audience. Creators use this trope as a non-intrusive way of informing the viewers, as it doesn't interrupt flow of the scene like having characters break off from a conversation to comment on it would.

Used in animation much more often than it is used in other media, as in Real Life this usually doesn't happen, and would disrupt the immersion of the audience if it was used in, say, a Live-Action Film. In other media, viewers are more likely to be informed of the smell by people complaining about it. It is worth mentioning that there are plenty of chemicals that do have distinctive aromas that also give off visible fumes, but in most cases, the two are independent of each other and can occur together or on their own.

This is a Sub-Trope of Editorial Synaesthesia. May be caused by a Smelly Skunk, a Weaponized Stench, Wilting Odor or Toilet Humour. Compare Tastes Like Purple. Follow Your Nose is when an enticing smell is not only visible but strong enough to carry a character along. See also Technicolor Wind when the air itself is color-coded.

Rosygury's perfume scent is visualized as a pale pink mist.

Rosygury's perfume scent is visualized as a pale pink mist.