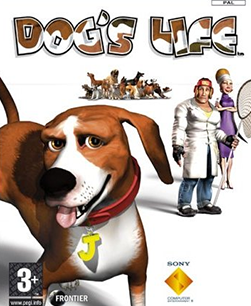 Dog's Life is a PlayStation 2 game initially released on the 31st of October 2003. In the game, you meet Jake, a slick farmhouse dog with some...ahem...vile habits and a crush on the neighbor's dog, Daisy. But Daisy is kidnapped and with a plot set into motion, its up to the heroic Jake to rescue her with plenty of challenges, scent sniffing, ripping fur off cats, Innocent Innuendo and even crapping on the sidewalk. Yup, it's that kind of game...
Advertisement:

Everything's going nice in the game, fun challenges, comedic characters and random acts of pointless defecating, this game is obviously a happy childish one...until Miss Peaches moves onto the scene and this kid's game reaches a whole new level. The evil business woman is plotting to make a new kind of cat food...made from all the dogs she's kidnapped. And Daisy's the first to be tested...

The game was praised for his premise because, let's face it, who doesn't like the idea of controlling a life-like dog? Although, it was criticized for its weird camera scheme. Also, as of 2009, it holds the world record for most voice overs done by one person in a video game with Kerry Shale voicing over 30 different characters.