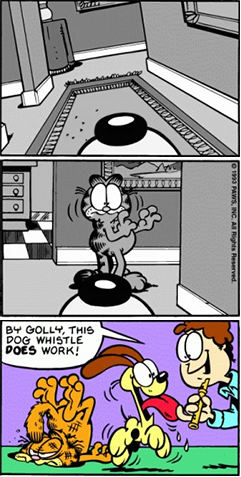 "What do you know, Brian? You're a dog. You can't see color. Which means you can't see the colors of the American flag, commie."
— Stewie Griffin, Family Guy
Advertisement:

It's a common misconception that animals, especially dogs and cats, see in only black and white. This is based on very old and outdated research. Science Marches On, with more modern research indicating that different species see differently and some animals can even see colours that humans can't. Domestic dogs, for example, aren't completely colorblind but they see colours less clearly than humans. Dogs don't differentiate orange and yellow well, but they can tell various shades of blue and green.note Dogs are dichromatic, while humans are trichromatic. That is, dogs only have two types of cones (blue, yellow), while humans have three (red, blue, green). So, while dogs don't see only in black and white, they are sort of red-green colorblind. "Sort of" because yellow is a combination of red and green light.

Despite it being inaccurate, fiction hasn't caught onto this. Many jokes and references revolve around dogs and other animals seeing in monochrome and suffering from Colorblind Confusion.