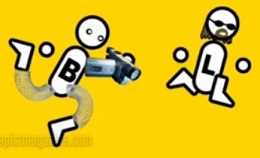 "And when you try sprinting, Christ, it's like [the camera man's] kneecaps have been replaced with slinkies."
"In third-person games, the camera is like the working class. If you can't control it, it will plot to destroy you."
— Ben "Yahtzee" Croshaw, Epic Mickey review

When the camera adds Fake Difficulty to a third-person view game, you have the Camera Screw, combining elements of the Interface Screw and Behind the Black. It has many causes:

There are also several ways to avert this, including:

When a franchise makes a jump from 2D to 3D, this can be often the reason for smacking into the Polygon Ceiling.

Additionally, Screen Crunch is a variation of this where the camera problems are caused by a lack of screen space.

Not to be confused with Camera Abuse.

Oops, the frame got shifted and... why are there 2 Daffys?

Oops, the frame got shifted and... why are there 2 Daffys?