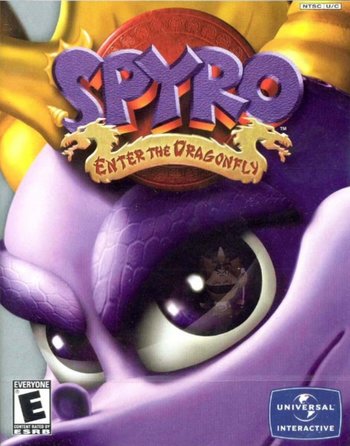 The sixth Spyro the Dragon game, released on the PlayStation 2 and Nintendo GameCube in 2002. This is the first console Spyro game to not be developed by Insomniac Games, instead being made by Check Six Studios and Equinoxe Digital Entertainment.

Spyro and pals are celebrating during the time of year when all the baby dragons in the land get their guardian dragonflies, who will guide and protect them throughout life (just like Sparx does for Spyro). Ripto makes a surprise return and decides to interrupt the festivities, scattering the easily frightened baby dragonflies all around the world. Spyro heads out to catch the baby dragonflies and defeat Ripto once again.

Gameplay is similar to the style set by Spyro 2: Ripto's Rage! and Spyro: Year of the Dragon; Spyro ventures through worlds in the Dragon Realms in search of the missing dragonflies, helping residents and gathering treasure in the process. Unlike earlier games, there's only one home world, and a much smaller level count, though the areas you do get to play in are significantly bigger. This game marks the first time Spyro has access to extra breath types that can be used throughout the game, including bubble breath (used to catch stray dragonflies), lightning breath (to activate electrical node switches), and ice breath (to freeze enemies).

Much like the later-released Sonic '06, the game is more well known in the gaming world for being pushed out incomplete, rather than its gameplay. Throughout its two-and-a-half year dev cycle, Universal ordered constant, total revisions; the final product went gold after only a matter of months. Thus, the game went down as an Obvious Beta, and the black sheep of the original Spyro series.