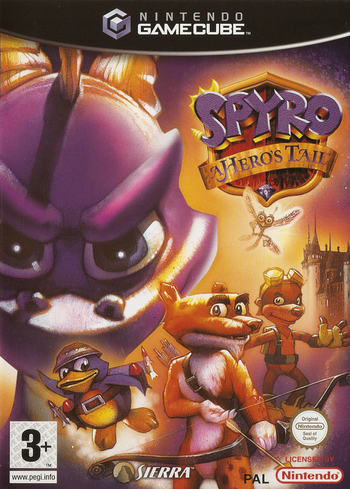 The ninth Spyro the Dragon game, released on the PlayStation 2, Nintendo GameCube, and Xbox in 2004. This is the second home console Spyro game to not be developed by Insomniac Games, instead being made by Eurocom and Travellers Tales, and was published by Vivendi Universal Games.

There's a new dragon in town, a former Dragon Elder called Red, and he's not exactly happy with the other dragon elders and the realms they inhabit. He and his army of Gnorcs and other baddies plant Dark Gems in the Realm; Crystals that radiate dark energy, warping their environment. Spyro is tasked by the Professor to track them all down and break them, freeing the realms of their Dark power, and return the lands to their splendor. In the midst of this adventure, Egg thieves have kidnapped dragon eggs from the nursery too! The Professor and his gadgets, as well as Hunter and Blink too! By now, Spyro's just gotten used to the whole "world-saving" thing—now if only he could figure out what Red's problem is!

As with Spyro: Enter the Dragonfly, it makes use of unlockable breath types: Fire (to kill enemies), Electric (to activate electrical nodes), Water (for puzzles), and Ice (to freeze enemies). The Professor also flexes his knowledge more, as you get to use some of his inventions to help you, such as supercharging, the Ball Gadget, temporary invincibility and more. The game also makes each of the realms much bigger. Each realm has multiple levels to them, which themselves house mini-games and Play-as-Hunter sections, instead of using portals to get to smaller specific worlds from hub area's. The gameplay is best described as a simplified Spyro 2: Ripto's Rage!, but in a Wide-Open Sandbox.

It was succeeded by the Nintendo DS game; Spyro: Shadow Legacy, which continues the plot of this game, with most of the cast returning. This is the last home console game for Spyro, and the second-to-last game overall in the original continuity before the franchise got rebooted into The Legend of Spyro series.

Freezia is an ice fairy that was captured by Red and bestows Spyro ice-breath when he frees her.

Freezia is an ice fairy that was captured by Red and bestows Spyro ice-breath when he frees her.