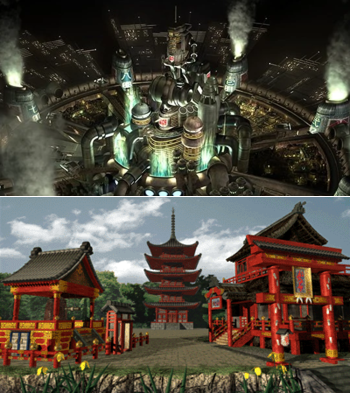 99% of the game: Cyberpunk dystopia.
This sidequest: Inexplicable feudal Japanese village.Note Hey, where did all my gear go?!
"It's like God got lazy and just copy-pasted Japan here."
— Touya Mochizuki, In Another World with My Smartphone
Advertisement:

Wutai is the village/country/continent, usually in what is otherwise a Medieval European Fantasy world, which has inexplicably (and suspiciously) fashioned itself off Jidaigeki (tales set in historical Japan). Filled with youkai, Onmyōdō, geisha, Ninja and/or samurai (and even the occasional Kaiju), this is where katanas, oni, kitsune, pagodas and sushi all pour out into the rest of the world.

These places are frequently a mashup of various Japanese eras, maybe flavored with a little bit of China, and — in a nod to real history — are usually xenophobic. The background music will be stereotypical Asian instruments, if not a public domain tune.

This can perhaps be attributed to the fact that most console RPG publishers are Japanese, indeed Wutai is a near quintessential part of a Standard Japanese Fantasy Setting. However, such a place may not stand out so much if the setting includes other non-European Fantasy Counterpart Cultures. It also tends to be less jarring if the setting covers a large geographical area; for example if it spans an entire planet, a Fantasy Counterpart Culture of Japan or China is no less likely than one of a European culture. Katanas Are Just Better, Everything's Better with Samurai, and Gratuitous Ninja are related phenomena. See also Jidaigeki and Far East.

Not to be confused with Jiānghú, the fantasy counterpart of China commonly seen in Wuxia.

Hands-On Hall is a Japanese-inspired segment where you can use the Gamepad Touch Screen to interact with the stage.

Hands-On Hall is a Japanese-inspired segment where you can use the Gamepad Touch Screen to interact with the stage.