Video Game / Prinny: Can I Really Be the Hero? 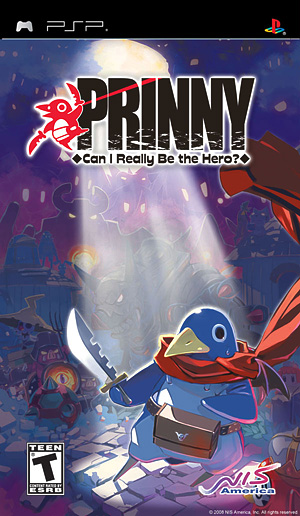 Every life is precious. Except his.
— Tagline
Advertisement:

Prinny: Can I Really Be the Hero? is a spinoff of the Disgaea games. This one's not a Turn-Based Strategy game like the others, though: it's a Platform Game. A very hard Platform Game.

Prinny puts you in charge of the combustible penguin army as they quest to find the legendary "Ultra Dessert" for their abusive master Etna. Hardly anyone knows what the actual ingredients are, but Etna sends them off to the most dangerous parts of the Netherworld anyway.

In order to get around the Made of Explodium properties of Prinnies, Etna gives them a special "Hero Scarf" that offers (very) limited protection against sudden impacts. There are a thousand Prinnies yet only one scarf, so the Prinnies have to pass it to the next one in the queue when the current wearer meets his (inevitable) demise, essentially giving the player one thousand lives. And you will need them.

The sequel, Prinny 2: Dawn of Operation Panties, Dood!, is essentially more of the same, except this time the Prinnies are looking for Etna's stolen panties. The sequel introduces a Baby Mode, a Super Mode called "Break Mode" and an Another Side, Another Story starring Nippon Ichi's eternally-miserable cameo character, Asagi.

As in the grand tradition of Disgaea games, the Hero Prinny appears in Disgaea 3: Absence of Justice as a unique character with his own special attacks and personality.

In March of 2020, Nippon Ichi confirmed a rerelease of both games in one package for the Nintendo Switch titled Prinny 1•2: Exploded and Reloaded, released the following October with various extras such as a soundtrack CD, artbook and collectible Prinny block figure. The games are also available individually on the eShop.