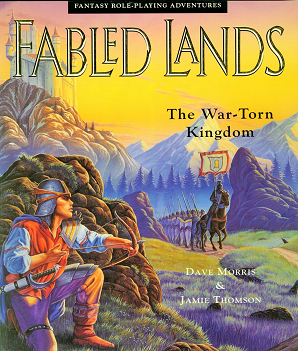 The Fabled Lands is a series of Gamebooks that were written by Dave Morris and Jamie Thomson. It was first released in the mid-nineties and, to this day, is probably the most elaborate gamebook series ever written.

It differed from other gamebooks (at the time) by presenting a Wide-Open Sandbox filled with numerous quests and places to explore. Each book covers one region that makes up the titular "Fabled Lands", and all of the books were connected so you could cross the border from one book to the next with the same character. While the "level" of the books scales upwards from Book 1 onwards, nothing is preventing you from traveling between the books in any order you wish. A vast array of "keywords" memorizes the quests you are on and the things you have accomplished, allowing the world to change according to your actions.

For example, you can help a deposed king reclaim his throne or assassinate him in the name of the new regime. You can climb the dizzying social circles of a mask-wearing theocracy, play the stock market for massive profit, or even buy your ship and make a living as a merchant by buying low and selling high. The sheer volume of options in the game makes The Fabled Lands stand out as a series.

The complexity of gameplay falls somewhere between Fighting Fantasy and Dungeons & Dragons. There are six stats (Charisma, Combat, Magic, Sanctity, Scouting and Thievery) to keep track of, with skill checks and fight scenes requiring (at most) two six-sided dice. There are also six character classes to choose from (Warrior, Mage, Priest, Rogue, Troubadour and Wayfarer), which determine your starting statistics and influence some quests. As the adventure unfolds, you increase your power in three main ways: finding better equipment (most equipment offers a boost to one stat), increasing your Rank (a rough equivalent to "character level") by completing major quests or overcoming exceptional trials, and increasing your basic stats through training or the completion of minor quests and challenges.

However, since this was a gamebook series created in the Nineties, it can also be extremely Nintendo Hard, with many choices leading you straight to an early grave and others offering a single dice roll between safety or the dreaded "You are dead" page. The game does offer limited help in the form of Blessings (which allow you to reroll a failed skill check) and Resurrection Deals (Exactly What It Says on the Tin) from temples, but they are pricey. And then there are moments when the Random Number God decides to burn down your town house and ruin all of your stored possessions.

Unfortunately, Morris and Thomson underestimated the production costs, and only six of the planned twelve books were ever published. However, There Was Much Rejoicing when this

was announced, and now the prospect of having the series Uncancelled is a very real possibility... if the reprints of the first six books sell well enough.

In July 2015, a Kickstarter campaign to fund Book 7 (The Serpent King's Domain) was launched here

. The Kickstarter was successful, and The Serpent King's Domain was released in February 2018, largely authored by Paul Gresty, working with the notes created by Morris and Thomson.

, with the blessings of the original authors.

In 2011, a Tabletop RPG based on the series was released. The RPG features slightly expanded rules and a series of supplements detailing the various lands. The first (about Sokara) has since been published.

A CRPG adaptation is available on Steam

. Released on Early Access on the 20th of May 2021, it encompasses The War Torn Kingdom, The Plains Of Howling Darkness, and, as of November 2021, Cities Of Gold And Glory with other books due later. May 2022 saw the full release, adding The Court Of Hidden Faces with Over The Blood Dark Sea and Lords Of The Rising Sun planned as DLC.

The Fabled Lands provides examples of the following tropes: