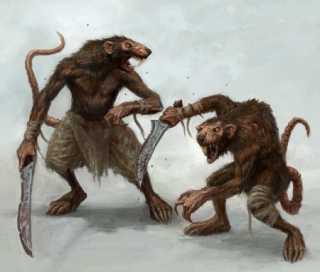 "Kill-slay the man-things! Yes yes!"
Master Splinter: You do not have to fear me, my friend. Rest assured I do not bite.
Casey Jones: He's a giant t-t-talking rat?!
— Teenage Mutant Ninja Turtles (2012), "The Good The Bad And Casey Jones"
Advertisement:

Ratmen are the rat equivalent of Lizard Folk: an entire race of intelligent anthropomorphic rodents or a single specimen thereof.

As is often the case with Lizard Folk, these creatures are likely to be villainous. Living in filth and squalor, reproduce at a dizzying rate and worship foul deities. Still, they can also be just another humanoid race with no particularly outstanding good or bad traits, or victims of a Forced Transformation. They may be (or descend from) rodents that developed humanoid features or humans that developed rodent features, whether through magic, science, radiation or natural selection.

Ratman supervillains often have either "rat" or "vermin" somewhere in their names. Ratman civilizations are sometimes given a quasi-Japanese flair or called "Nezumi," which is simply the Japanese word for mouse or rat; the proper Japanese translation for Ratmen would be "Nezumi-jin."

Subtrope of Beast Man. Contrast Rodents of Unusual Size (where the rodents are huge but not necessarily humanoid or intelligent).

Note when adding examples: do not confuse ratmen with wererats: the latter are humans who can assume the form of a rat (or a giant rat, a human-rat hybrid, etc). Normal-sized rodents with human mannerisms do not count unless they are explicitly called out as abnormal in the fiction they appear. Refer to Sliding Scale of Anthropomorphism for guidance.note Wrong examples would be Tom and Jerry, The Great Mouse Detective, An American Tail, Capitol Critters, Cinderella's mouse friends, all rats from Ratatouille, Rizzo the Rat from The Muppet Show, Mickey Mouse, the Jews in Maus, the Rat King from The Nutcracker.