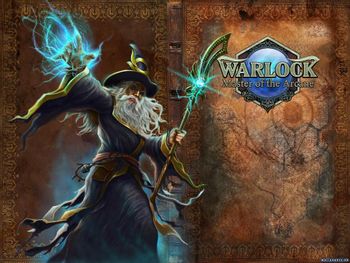 Warlock: Master of The Arcane is a 4X game developed by Ino-Co Plus and published by Paradox Entertainment in 2012. It is a Spiritual Sequel to Master of Magic, utilizing many of its components with new addtions.
Advertisement:

The player picks or customizes a Great Mage, starting with one of the three races (Humans, Undead or Beasts) and proceeds to attempt to claim victory either by eliminating opposing wizards, casting the ultimate spell, defeating an Avatar sent by one of the gods or by controlling over half of the holy sites in the land of Ardania .

Games take place on a hex-based map. Unlike in other games of the genre, each structure is placed on the map individually, instead of being built "inside" the city. Furthermore, the player can only construct one building per population point. Building structures is free, but as noted, limited by available spaces and population.

Resource management is divided into four parts: Gold and Mana, which the player can stockpile, and Food/Research, which is used each turn, with surplus converted to Gold/Mana respectively. Food is required to grow cities and feed the armies, while gold is used to buy and upkeep the army. Magical units and enhancements do not require gold, but instead consume Mana each turn. Mana is also used to cast spells.

Spells come in a variety of different forms ranging from direct damage and healing, enchantments and debuffs capable of affecting entire players, summoning of magical units and items and even terraforming. In addition to normal spells, player can also seek the favor of one of the 8 gods gaining powerful, thematically appropriate spells and units. However, seeking the favor of one god will anger the god of the opposing spectrum. Should the player become champion of his chosen god, the opposing god will send an avatar to kill the player. Defeating this avatar is one of the victory conditions.

The map plays a large role. On the map, there are numerous special tiles containing special resources. Capturing these special resources allows the player to build a special building on top them. There are usually two buildings the player can build, with each resource tile only allowing one. For example, a tile containing silver allows player either to build a mine to boost their outcome, or a building that allows player to equip his troops with silver weapons and armor.

The game received five DLCs, two minor and three major. Powerful Lords DLC added new lords mages for the player to select and Lord of Artifacts added new artifacts which the player could craft into spells. The first major DLC, Power of the Serpent, added new characters for the player to select, a new resource node(Koalt village) and new units. The second DLC, Return of the Elves, added a new Elven faction with new units, mages and style. The last DLC, Armageddon, added new NPC faction called Dremer who appear in the new game mode Armageddon. In this game mode, after a set amount of turns, Dremer start to invade the world, slowly terraforming it into hostile world. The attacks keep growing stronger, until one of the players can defeat the threat by invading the Dremer universe itself and killing their leader.

The sequel, called Warlock II: The Exiled, was released in 2014. Unfortunately, the original game is no longer sold separately, requiring players to buy the enhanced edition that includes all the DLCs. Those who have the base game can upgrade their version to enhanced version through contact with Paradox support.