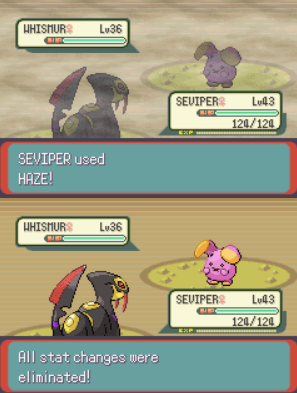 "The Sorceress points at you and a beam of very sticky light bursts out of her finger. It strikes you and you suddenly feel very, very normal."
— Kingdom of Loathing
Advertisement:

Many games include a spell that will allow you to negate Status Buffs that some enemies have a propensity to cast on themselves. It's frequently known simply as a "Dispel" or a similar name. Out of necessity, it is also one of few spells that ignores "reflect"-type status buffs.

This can even be used tactically - if an enemy likes to spend several turns casting multiple buffs upon itself before attacking, it'll all be for naught when you just dispel all of them in one action, and the enemy will probably waste turns trying again instead of choosing to attack you directly. Conversely, if an enemy likes to dispel your status buffs, you can dedicate one character to repeatedly casting the same buff over and over so the enemy spends time constantly dispelling it rather than attacking.

But be warned: Not all status buffs (or dispels) are created equal! Sometimes the ability to dispel a status effect is linked to the characters' respective skill levels (e.g. a low-level caster probably can't dispel a high-level status buff, or only removes one buff per casting instead of all), and complete immunity to dispels isn't out of the question either; especially for bosses, and doubly so if they Turn Red. Also note that since the dispel action is usually a spell in and of itself, you can often prevent it from being used in the first place by Silencing the caster.