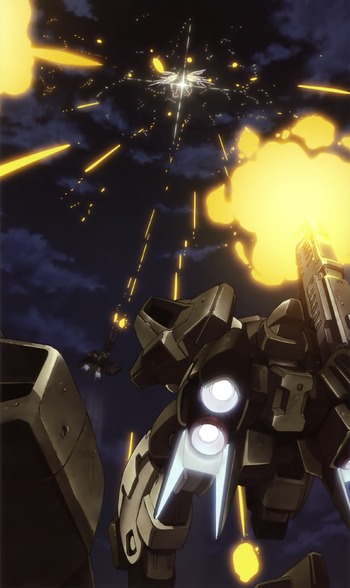 "Everybody, give this attack everything you've got!"
"Fire! Fire! Open up with everything we've got!!"
— Chimera Commander, Warhammer 40,000: Dawn of War
Advertisement:

Sometimes you just need to pull out all the stops and kill stuff good. An alpha strike is just the thing to help you accomplish that! An alpha strike refers to a unit attacking a single target with every weapon it has, all at once. When successful, the result is an absolutely devastating bombardment that turns its hapless target into a smoking crater. When unsuccessful, the attacking unit will usually be in for a world of hurt, as an alpha strike usually leaves it out of ammo, overheated, overextended, or otherwise vulnerable to a Counter-Attack from a surviving opponent (which will be even worse if the attacker is a Glass Cannon).

The phrase "alpha strike" originates from The Vietnam War, where it referred to a US aircraft carrier deploying its entire air wing to attack a single target, unleashing massive firepower at the cost of leaving the carrier basically defenseless for the duration of the attack. The term was eventually co-opted by tabletop wargamers, using the definition presented here.

During an alpha strike, expect to see Beam Spam, Macross Missile Massacres, More Dakka, and any other Spam Attack that the attacker has handy, all used simultaneously. Sometimes a type of Attack Pattern Alpha. Often a form of Death or Glory Attack. See also There Is No Kill Like Overkill. Vulnerable to becoming the Worf Barrage if it's shown to be ineffective.