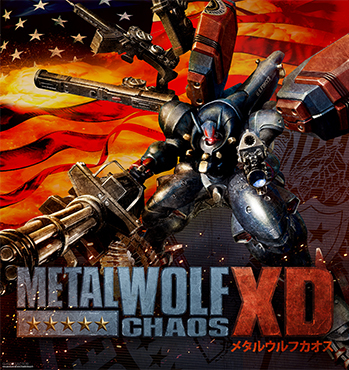 "LET'S PARTYYYY!"
"It is 2004. I am taking you on a journey to 2004. Our good friends at FromSoftware released a game that, unbeknownst to them, would lay the very foundation for the modern American political landscape. This game, this motherfucking legendary piece of cold-rolled amazing, was forged in the most sacred elements of video game development: mechs, explosions and overly-dramatic voice acting. Ladies, gentlemen, holy fucking shit, may I present to you FromSoftware's 2004 masterclass in democratic mech warfare: METAL. WOLF. CHAOS."
— Nina Struthers, Devolver Digital E3 2018 Press Conference
Advertisement:

Michael Wilson, veteran of the Arizona Insurrection and 47th President of the United States has been deposed in a military coup by his running mate, Richard Hawk. Now, he must take up the guise of Metal Wolf and take back America city by city, armed only with his Mini-Mecha and the power of burning American freedom.

A game this American could only have been made in Japan.

Metal Wolf Chaos is a 2004 original Xbox game made by FromSoftware of Armored Core and Souls fame, which unfortunately (and weirdly) was never released outside of Japan. It is a mecha game similar to the Armored Core series, focused around the highly American pursuit of blowing stuff up, with a plot and dialog that is the epitome of Hot-Blooded American Patriotic Fervor, regardless of coming from a different country altogether. Weaponry includes machine guns, rocket launchers, and a shark gun — yes, a shark gun — while the plot takes you to shootouts in the southwest, bomb threats in Beverly Hills, mangling mechas in Manhattan, redecorating the White House with missiles, a showdown with Richard in Las Vegas, and space, assisted along the way by a resistance force skilled only in blocking tank cannons with their helicopters, and the President's slightly psychotic secretary, Jody Crawford.

Michael Wilson and his mecha made also a cameo appearance in FromSoftware's Enchanted Arms as a bonus boss which unlocks the ability to use him in battle once defeated. He also made another appearance in 3D Dot Game Heroes as the "President" model.

, publisher Devolver Digital announced their intent to localize the game overseas... which indeed came to pass at E3 2018 with their announcement

and partnership with General Arcade of a remastered version

, dubbed Metal Wolf Chaos XD, and was released on PlayStation 4, Xbox One, and PC through Steam and GOG.com on August 6, 2019, finally allowing international audiences to experience the patriotic insanity after 15 years of being an import-only console game. Since the remaster's announcement, Devolver has released various videos during its development, which are the E3 2018 teaser trailer

of the game's legacy, and the "Let's Party" Pre-Release trailer

by Powerhouse Animations. A "Behind the Schemes"

See also Liberation Maiden for another game about a fictitious presidential figure piloting a mecha to save their country. Absolutely not to confused with nor related to the 2002 Princess Soft sci-fi visual novel, Metal Wolf.

Mr. President, believe in your own tropes: