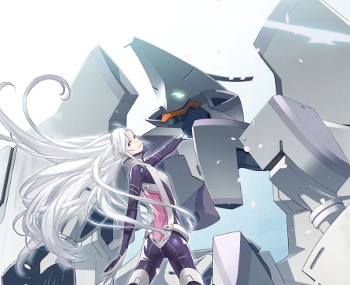 "We'll fight for our people!"
Liberation Maiden is a short 3D Shoot 'em Up developed by Grasshopper Manufacture for the Nintendo 3DS in 2012.
Advertisement:

100 years into the future, the world is being conquered by a country known only as the Dominion. They've taken over much of the globe already, and have recently invaded Japan. Led by a revolutionary government official named Yokoichiro Ozora, Japan dissolves its parliamentary government and elects Ozora as the First President of New Japan.

Tragically, President Ozora is felled by an assassin's bullet just as the new government is on the verge of making headway in the resistance movement. His daughter, Shoko, quickly steps into action and is elected Second President of New Japan. Armed with her Humongous Mecha the Liberator "Kamui" and the Battleship Nagata, Shoko leaps into the battlefield to fight for her country's freedom.

Stages consist of Shoko piloting Kamui through a Dominion controlled city of Japan, destroying enemies with either a barrage of homing missiles or a high powered laser beam. Both are powered by Kamui's shield, leaving you vulnerable to enemy attack while it's recharging.

Your goal in each stage? Destroy the Greater Conduit Spike that is siphoning Spirit Energy from the Earth. Before you can do that, however, you must take down the three Lesser Spikes that are powering the shields protecting it. All while swarms of enemy units are shooting at you from all directions.

Originally part of the Japanese-only Level-5 game compilation Guild 01, Liberation Maiden was released in Europe and the US as a standalone 3DS eShop title in October 2012. It was also ported to iOS in March 2013.

In 2013 a sequel/spinoff was released for the PS3 and Vita, titled Liberation Maiden SIN.

It is a Visual Novel about Kiyoto Kaido, Shoko's new chief of staff, who can read people's thoughts, and features several new characters including Shoko's all-female cabinet.

For another game that also involves a fictitious president piloting a mech to save their country, see Metal Wolf Chaos.