Video Game / The Liar Princess and the Blind Prince 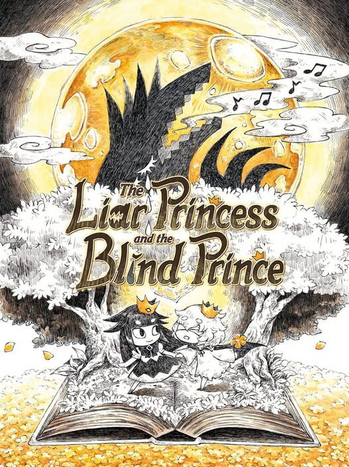 Below, the Princess and Prince. Above, the Princess' true form.
I don't want to let go of your hand...
Never...
Ever...
Until the end of time.

The Liar Princess and the Blind Prince is a game by Nippon Ichi, originally released in Japan in May 2018, and released internationally in February 2019. It is available for PlayStation 4, Play Station Vita, and Nintendo Switch, though the Vita version is not being released outside Japan.

To quote the description of the official international Announcement trailer

, The Liar Princess and the Blind Prince follows the tale of two lonely hearts brought together through a mutual misunderstanding. In it, you control the Wolf, transformed into the guise of a Princess who guides the Blind Prince through a perilous forest in search of a witch capable of returning his sight. The forest is home to a number of hostile beasts intent on ending your journey prematurely, as well as hazardous traps that put the Prince in danger. Transform into the Wolf to dispatch your foes and guide the Prince carefully as a Princess to ensure his safety, in search of a happy ending.