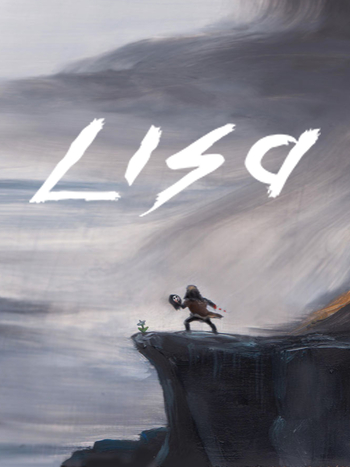 The miserable journey of a broken man...
"A game about survival, sacrifice, and perverts..."
— Steam Description
Advertisement:

The LISA trilogy is a series of indie games developed by Austin "Dingaling" Jorgensen. Each of the games in the series has "LISA" in the title, take place in the same universe, and share themes such as physical and psychological abuse, mental illness, human depravity, and substance abuse. It takes place in Olathe, an... area in the United States, chronicling the journey of three members of the Armstrong family and their lives both before and after 'The Flash', an unspecified apocalyptic event that turned Olathe from a lush green locale to a Mad Max-esque desert wasteland.

Released on September 10th, 2012, the original LISA (later re-named "LISA: The First" to avoid confusion with the sequels) is an Adventure Game created using RPG Maker 2003 that explores the non-specific but not exactly vague ways that the unfortunate circumstances of the titular young girl Lisa Armstrong's life have affected her. She not only tries to escape from them, but she also tries to escape from the man at the center of it all as well, her abusive father Marty Armstrong. You can download it here.

On November 21st, 2013, Austin released a demo for his next game, "LISA: The Painful RPG", as a reward for one of its Kickstarter goals being reached. You can download it here

. Then, on December 15th, 2014, Austin finally released the full game. Unlike "LISA: The First", the second installment is an Earthbound-style RPG sidescroller taking place in a world without any women, who were wiped out by The Flash. The protagonist is a bald, aging and troubled martial artist named Brad Armstrong, the now-grown brother of Lisa. He and his friends make a living in the harsh desert land when, one day, a baby girl is left outside Brad's home. Seeing as she is the (supposedly) last female on Earth, Brad adopts her and names her Buddy.

When she eventually gets kidnapped by grunts of Rando, a skull-masked warlord who intends to use her to repopulate humanity, Brad sets out on a journey to rescue her while facing the horrors of a world filled to the brim with idiots, perverts, slavers, a mysterious masked cult known as the Joy Boys who distribute a drug called Joy (which makes the user "feel nothing"), and the mutated monstrosities known as Joy Mutants who have been warped by the cult's creation.

The game features up to 30 recruitable party members, each with their own unique personality and abilities. It is also notable for being one of the most difficult RPGs ever, with tough enemies and bosses, limited money, and a treacherous environment, among other things. One of the more notable features of the game is its "sacrifice" system. Sacrifices are everywhere in the game, such as the choice of either having Brad's arm chopped off (severely decreasing Brad's stats) or a valuable party member slain. It's called "The Painful RPG" for a reason.

A DLC epilogue, Lisa: The Joyful was released on August 24th, 2015. Taking place after the events of Lisa: The Painful RPG, it focuses on Buddy, who is tired of being controlled by men, trying to take down the various warlords and conquer Olathe so that she may never be hurt again, while uncovering the mysteries of her world and her past.

(The tropes you see in LISA increase your need for Joy.)