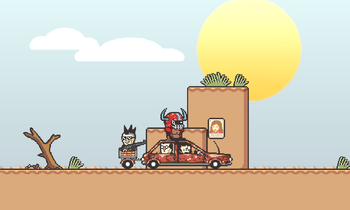 Lisa: The Painful is a game about dipshits and perverts. In Lisa: The Hopeful, that's exactly who you are.
LISA: the Hopeful is an Interquel of LISA, made by Taco Salad. Much like LISA: The Pointless, it is one of few LISA fan games to actually reach completion and be released to the public.

In this game you play as Beltboy, a gunslinger with a knack for using bullets far in excess of what he needs, and his friends Lanks, a dorky man with the heart of a child, and Cyclops, a black man with one eye who has the innate ability to headbutt people to death with a horned football helmet. The team catches wind of a girl who has been sighted in the vast lands of Backwater Olathe, and naturally they hit the road in their station wagon to try and find her. The game begins with the crew stranded after failing to fill up their tank, with no gas for their car at the base of a series of cliffs. Frustrated at his lackeys' incompetence, the group leader (and the trio's boss before the Flash came), Rodriguez, sends the other three out in search of gas for their car so that they can begin their search anew. Things build up from there, and the gang finds themselves embroiled in numerous conflicts all across Backwater Olathe, fighting gangs, mutants, and sometimes themselves in this winding chase they find themselves in. With little else to go on, the team makes the best of what they can, hoping against hope that they can get to the girl first before anyone more... dangerous, can get to her first.

Gameplay is often described as similar to Joyful, albeit with more of a party to speak of, and players will find themselves fighting battles that must be carefully managed, lest they waste resources that would be better served later. Enemies tend to hit hard, though mercifully so do most of the party members, and there can be a wealth of resources for the observant or exploration-minded player. The party does not change much at all over the course of the game, and thus you will get plenty of time to get to know the people in your group, and hone their skills so that you can become a force to be reckoned with.

The Definitive Edition, supposedly the final content update, is notable for adding a wealth of side areas, updated graphics, and several new alternate routes.