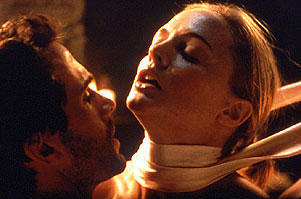 Not to be confused with Marshmallow Hell. Related to Out with a Bang, if you do it wrong. note Or, if you happen to be into that sort of thing, right. Possibly related to Too Dumb to Live, in any case. Sometimes used to promote the idea that Bondage Is Bad.

For clarification, auto-erotic asphyxiation is doing it yourself, typically via some form of hanging, as opposed to getting someone else to do it to you. It should go without saying that this is a terrible, terrible, terrible idea - to the extent that many of the more famous deaths from it

have happened that way. On the other hand, if you do get someone else to do it and things go wrong, it is liable to get them convicted of murder or manslaughter even if they manage to convince the court that it was consensual. Also, being drunk or under the influence of drugs that affect alertness (whether by making you feel more alert than you are or by lessening awareness and consciousness/depressing the central nervous system) increases the odds of dying, especially if combined with doing it solo.

If you survive it, you can put yourself at risk for chronic traumatic brain damage (in the same way people who suffer from repeated mini-strokes or concussions do - cutting off oxygen to the brain for any amount of time damages it, even if the damage is not noticeable immediately, brain damage is cumulative), a major stroke that may be delayed due to damage to the arteries in the neck/dislodging fat or a clot in one of them, and/or weakening or breaking the bones in your cervical spine, causing anything from chronic pain to death when/if the wrong one breaks. The risk of both stroke and broken neck vertebrae is also multiplied exponentially if you do anything else - from playing football or hockey to headbanging or having your hair done in beauty salons a lot - that inflicts trauma to the region.

In short, Don't Try This at Home. Or anywhere.

Kenny ends up doing this to himself after Dr. Tonton explains what autoerotic asphyxiation is, complete with dressing up in a Batman costume.

Kenny ends up doing this to himself after Dr. Tonton explains what autoerotic asphyxiation is, complete with dressing up in a Batman costume.