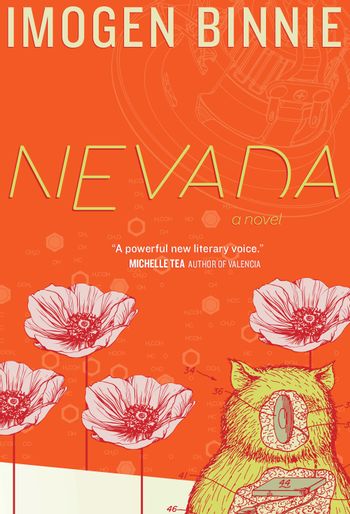 "...that kid is trans and he doesn't even know it yet"
Advertisement:

Note: This is not the same as the book of the same name by Clint McCollough

Nevada by Imogen Binnie is a novel about the life of Maria Griffiths, a trans woman who, after running into issues with her personal and professional life, decides to take a road trip to Nevada. It is known for being perhaps the first novel about a trans character that concerns itself not with the character's transition but on her life after transition.

Maria Griffiths is a trans woman living in New York city, she has a dead end job and a girlfriend she doesn't love anymore. After she finds out said girlfriend has cheated on her, she steals her car buys a lot of heroin, and runs away on a road trip to Nevada. There she meets James H. a young man that she's convinced is a trans woman who she must help come to terms with his gender.

The author has said that the intention behind the novel that didn't fall into the usual trap of serving as an introduction of transgender issues for cis people. The result is a novel that may be incomprehensible to larger audiences, but that is deeply beloved by the audience for whom it was written, other trans people. Indeed the book was reviewed negatively by critics upon release and yet it has a very large following amongst trans people, who often credit it for helping them come to terms with their gender.

For the actual U.S. state of Nevada, see this page.