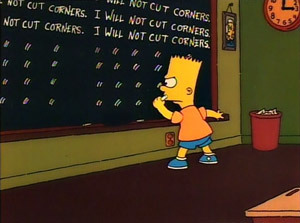 Coming up with methods to evade, enliven or simplify this punishment is commonly attempted. These include getting a computer program or magical spell (in Wizarding School) to write the lines automatically, taping multiple pens together so you can write multiple lines at a time (which does not work in Real Life), drawing a vertical line down the page to reduce each sentence by one word (by creating a non-serif 'I' for the phrase 'I must'), farming the lines out to underlings or altering your handwriting so that 'I must not' starts to look like 'I must'. These may be used successfully by a High School Hustler. Other characters trying this will most likely be caught out and have to redo the work properly.

This has become something of a Discredited Trope, as using this as a discipline has fallen out of favor, since many teachers have complained that it has a negative impact on students as it turns writing (something which makes up a bulk of the school curriculum) into a punishment. However, depending on the teacher, it still sees application today in uncommon instances.

A variation on this trope is occasionally seen, in which the repeated line is to be spoken (in a deadpan mutter) instead of written.

Distinct from Madness Mantra and/or Room Full of Crazy in that this is enforced as a punishment on someone, not something a character does of their own decision.