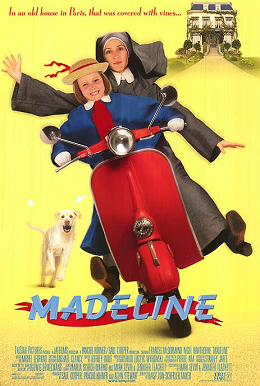 The 1998 film adaption of the Madeline book series by Ludwig Bemelmans.

The film is about a young, orphaned girl named Madeline (Hatty Jones), who attends boarding school that is run by nun Miss Clavel (Frances McDormand) with eleven other girls in Paris, France, in the 1950s. Following her appendectomy, a Spanish boy named Pepito (Kristian De La Osa) moves in next door and begins to cause havoc towards the girls, while his tutor Leopold (Ben Daniels) intends to use the boy for a more sinister plot. Soon, the owner of the school Lord Covington (Nigel Hawthorne) reveals his intentions to sell the house, since his wife has just passed away.

It's up to Madeline and her friends to save their school from closing, tame the boy next door and prevent a villain from promoting his plan.

Not to be confused with Madeline, a 1952 animated short that was nominated for an Academy Award.