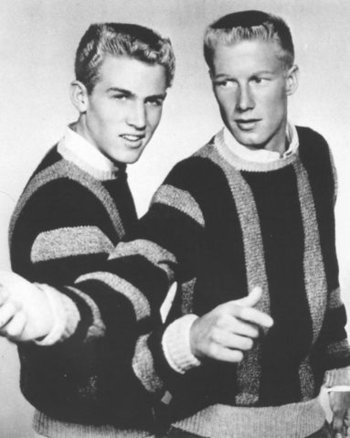 Jan and Dean were an influential American singing duo, who started in the late 1950s but were most popular in the '60s.

Almost as important to the surf-pop scene as The Beach Boys, Jan and Dean made countless songs, some of which are commonly misattributed to the Beach Boys due to their similar vocal harmony sound and subject matter. The rivalry between the acts was a friendly one; in fact, Brian Wilson co-wrote several of their hits, sang backup on "Surf City", and allowed the tune of his "Catch a Wave" to be re-used for the duo's "Sidewalk Surfin'". Dean, in turn, contributed (uncredited) co-lead vocals on the Beach Boys' hit version of "Barbara Ann".

Their full names were William Jan Berry (April 3, 1941 – March 26, 2004) and Dean Ormsby Torrence (born March 10, 1940), and they first met playing high school football together in Los Angeles. Berry first came onto the pop scene with 1958's "Jennie Lee", recorded with Arnie Ginsberg as "Jan and Arnie" due to Torrance getting drafted into the U.S. Army Reserve. Berry and Torrance scored their first hit as a duo with "Baby Talk" in 1959, and kept singing while going through college at UCLA (unlike the Beach Boys). However, tragedy struck in 1966 when Jan crashed his car a short distance near Dead Man's Curve in Beverly Hills, slipping into a two-month-long coma and suffering partial paralysis and brain damage but retaining his genius-level intelligence. The duo had a comeback in the 1970s. Berry died in 2004, but Torrence continues to tour and give interviews.

Two tropes for every boy!