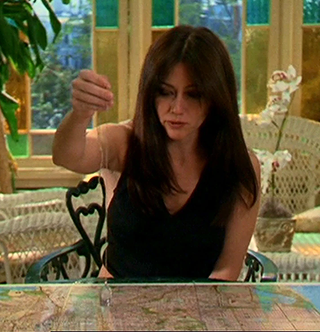 Apparently GPS now stands for Global Pendulum System.
Your heroes need to track down a villain, or a villain needs a way to locate the heroes, or a character has gone missing and needs be tracked down but the trail is colder than an ice queen in a blizzard. High tech solutions either don't exists in this setting, or would be useless, as would normal tracking techniques. What are they to do?
Advertisement:

That's where the Tracking Spell comes in. In fantasy fiction tracking spells are used to locate individuals, either by pin pointing their location like a tracking device or mapping their steps, or pointing their direction like a compass. Often they require either an object that belongs to the person being tracked, or placing an enchanted item on them and following after them. Can be seen as a form of scrying.

Of course, the Tracking Device is the non-magical equivalent. Often depends on Sympathetic Magic, using a piece of the target or something connected with them to make an attachment. Related tropes might be Dowsing Device, Crystal Ball and Surveillance as the Plot Demands.

Sensor Character is a character who is specialized in using tracking spells.