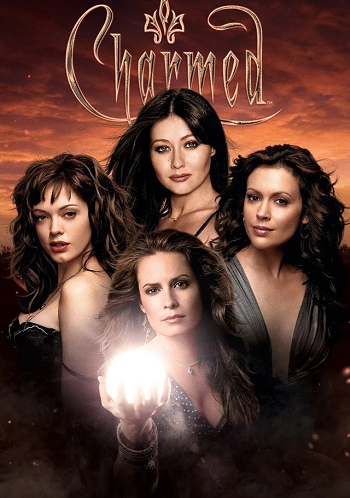 "The Power of Three will set you free."
Advertisement:

Charmed is a show that ran from 1998-2006, wherein three San Francisco-based girl-power witch sisters vanquish demons through the triple powers of CGI, rhymes, and lots of cleavage, whilst dealing with personal relationship drama. The show was created by Constance M. Burge, inspired by the cult 90s film The Craft. Having trouble getting networks to pick up the witchcraft concept, she made the characters sisters and the show was greenlit.

Charmed can be divided into two sets of seasons. Seasons 1-3 are the 'Prue Years' featuring Shannen Doherty as the eldest Halliwell sister Prue. Doherty left the show after that season and Rose McGowan was cast as sister Paige for seasons 4-8. The other two sisters were played by Former Child Star Alyssa Milano (who helped carve out a successful career as an adult actress thanks to Charmed) and Picket Fences actress Holly Marie Combs. Other cast members included a pre-Nip/Tuck Julian McMahon and a pre-The Big Bang Theory Kaley Cuoco.

A pretty successful show, Charmed ran for eight seasons and for a while was the longest running network TV show with female leads - until Desperate Housewives caught up to it. The show is also known for its quite surprising tonal shifts between seasons - compare Season 2's slow-paced Slice of Life plots to Season 3's action-packed arc-based story telling - the sisters' clothing getting Hotter and Sexier with each year and quite a few continuity issues - just how many times was Penny Halliwell married anyway?note The final answer seems to be four, but one episode said six, and it later got clarified to four marriages and six engagements.

The series returned in comic book form thanks to Zenescope Entertainment, receiving mixed to positive reviews from fans and critics alike. Series includes:

As with anything 90s and successful, talks of a reboot existed since 2013 until finally a new Charmed series began airing in 2018.

open/close all folders
Tropes #-D
was based on.
Tropes E-H

To their credit, it's Equal Opportunity Fanservice, too.

"That's what I call stifling"

"That's what I call stifling"