Muse to My Ears

The sisters fiercely battle warlocks who are enslaving the world's muses to use divine inspiration for evil. 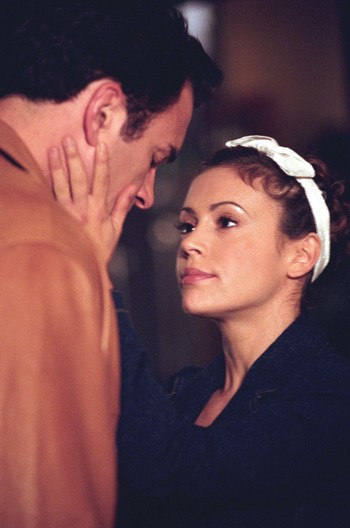 Cole enters the kitchen and finds Phoebe there. She removes her apron, revealing a beautiful black dress. She informs him that she sent everyone away so that they could celebrate the fact Cole is finally fully human. After attempting to make a toast Cole tells her that he doesn't think it was a good idea to send away her sisters, especially since he no longer has his powers to protect her—something he forgets when he tries to grab dinner out of the oven with his bare hands and is slightly burned. He is worried about the rise of demonic factions now that the Source is injured. After some coaxing, Phoebe convinces him to relax, promising to pay attention to the fact later.

Meanwhile, a politician is writing a speech. A Muse appears behind him and he begins to find his voice. A warlock named Devlin blinks in, however. To the Muse's shock, he's wearing the Ring of Inspiration. Before she can react, Devlin draws the Muse into the ring. He then kills the politician with the Touch of Death.

The next day, Piper and Phoebe talk about Phoebe's date with Cole. Phoebe tells Piper that Cole spent the entire date talking about demonic factions and Piper suggests that it's easier for Cole to talk about demons than what's really on his mind. Phoebe asks Piper to elaborate and she brings up the fact Phoebe turned down Cole's marriage proposal. Piper suggests that Phoebe talk to Cole about it again. As Piper begins to head to P3 to plan a corporate party, Phoebe follows her and expresses concern about being attacked by demonic factions. She goes on to ask Piper if there's a protection potion she could make. Piper doesn't think there's such a thing. Phoebe reminds Piper that Cole is mortal now and this convinces her to make something, but only after she goes to P3. Phoebe volunteers herself and Paige to go in her place, while Piper stays behind to create the potion.

Devlin and another warlock confront a homeless man who turns out to be a demon in a glamour. The other warlock kills the demon with an athame and takes his power. It turns out that Devlin has ambitions of becoming the new Source, and is trying to garner enough support among his fellow warlocks to overthrow the current Source. Devlin convinces the other warlock to attack the Charmed Ones, imbuing him with inspiration to do so. He then gathers followers by imbuing him with inspiration from the ring.

At P3, Phoebe and Paige convince a woman named Bev to throw a 40s themed party. After she leaves, Cole joins them at P3. Phoebe hugs him and senses something different. Cole pulls out a gun from his belt, scaring them. Cole explains that he wants the gun to protect himself and Phoebe. Phoebe tells him that having a gun at the Manor makes things more dangerous, not less. Leo orbs in and warns the sisters that Muses are disappearing, and the Elders are worried. Devlin's warlock crony blinks into P3 and overhears their conversation briefly. Phoebe takes away Cole's gun and hands it to Leo sayig to orb it to Mars. Leo orbs away as Phoebe, Paige and Cole head to the Manor. The warlock glamours into Leo and leaves P3 as well. The sisters consult the Book of Shadows and Phoebe feels a chill. A Muse, Melody, has appeared behind her and inspires Phoebe to cast a spell to make her visible. Melody tells the sisters about the Ring of Inspiration, and the warlock that is using it. "Leo" walks into the attic, but he doesn't appear to know nearly as much about Muses as a Whitelighter should know. Piper smells a rat and calls for the real Leo. The fake Leo pulls an athame and stabs Phoebe, then blinks behind Paige and drops his glamour. Cole shouts a warning, and Paige orbs out. Piper blows up the warlock.

The sisters and Cole find themselves inspired in different ways. Piper is inspired to brew up a potion. Paige is inspired to draw a composite sketch of the warlock behind the scheme. Phoebe is inspired to write a vanquishing spell. Cole is inspired to head to the underworld to find out who the faction leader is, because he knows the terrain. Everyone starts to get a little heated; the extended presence of a Muse is stirring up tensions, as Leo explains. After things calm down, Piper asks Cole to join her in the kitchen so he could tell her everything he knows about warlocks. Once they're in the kitchen, she asks him to be patient with Phoebe on the marriage front. She turns her back on Leo and Cole for a second, providing Cole a chance to pull Leo aside to talk in private. Cole suspects that the warlock killed a demon and took his powers—an offense that carries an automatic death sentence. He thinks that if he and Leo orb to the underworld, they can find out who's responsible. Leo thinks it's a bad idea to orb him to the underworld, but eventually agrees.

While Phoebe works on a spell, Paige draws Devlin with Melody's help; she thinks she can use that drawing to orb the ring off Devlin's finger in hopes of luring him to the manor. Piper crafts a potion that will blind Devlin long enough for the sisters to finish him off with the spell. Paige doesn't understand why Piper doesn't blow the warlock up, but Piper wants to use the spell just in case the warlock is immune to her blasting power. In the Underworld, Leo and Cole are seen by Rake, of Cole's friends when he was Belthazor. Not wanting to chance being discovered, Cole pulls a knife and kills Rake. Phoebe finds Cole missing and that Leo isn't answering his call. The sisters go ahead with their plan anyway. Paige focuses on the drawing, with help from Melody's coaching, and calls for the ring.

One of Devlin's cronies has just killed another demon and taken his powers—which include energy balls. Just then, the ring orbs off Devlin's finger. Devlin wants to storm the manor, but his flunky is reluctant to do so. Devlin, however, thinks they can take the sisters by surprise; they're expecting one warlock, not two.

Leo and Cole return from the underworld to find the sisters deflated by Melody's capture. Leo and Cole tell them about Devlin. The sisters mope, but Leo and Cole try to encourage them. Cole argues with Phoebe and he accuses her of not really loving him, let alone wanting to marry him. Phoebe admits that she doesn't know how to be a wife, but then makes a rhyme as she kisses him. Phoebe now tries to inspire her sisters.

Devlin has raised an army of warlocks, and makes plans to ambush the sisters. He imbues them with inspiration, and they all blink out.

The sisters prepare another batch of Piper's blinding potion and then speak a spell to bring them to Melody. To their surprise, they find themselves at P3, where the party is in full swing. They realize that the warlocks are among the attendees.

Cole has a sinking feeling that Devlin is setting a trap for the sisters, which is confirmed when Leo senses they're at P3. Knowing that the sisters can't risk exposure by using their powers in public, Cole has Leo orb them to the club.

Piper is startled by Bev and drops her potion, which causes a flash. Realizing it's too risky to use their potions, Piper comes up with an alternate plan. She turns off the house lights, turns on the strobe lights and freezes the innocents in the crowd. The sisters' hunch is right—there are several warlocks in the crowd, and they're all blinded by the strobe lights. Piper blows one of them up. Another throws an energy ball, but Paige orbs it to her hand and throws it back at the warlock, vanquishing her. Piper spots a warlock dragging Melody away. Phoebe kicks him down, and Piper blows him up. The other warlocks, realizing their plan has backfired, blink back out when given the choice by Piper.

The sisters and Melody head into the alley behind P3. Piper goes back inside to unfreeze the party. Out of nowhere, Melody puts her hand on Phoebe's face, and it starts to burn. Just then, Cole rushes in from behind and knocks "Melody" to the ground. Phoebe blinds "Melody" with the potion, giving Cole enough time to pull the ring off "Melody's" finger. "Melody" turns out to be Devlin in a glamour. Piper comes back out in the midst of the commotion and tries to blow Devlin up. However, she only succeeds in blowing off his arm, which quickly regenerates. The Charmed Ones quickly cast the Power of Three spell Melody inspired them to write and Devlin is vanquished. Paige lets Melody out of the ring and the sisters cast a spell to make Melody invisible again.

The episode ends with Paige painting in the attic, Piper and Leo spending time together in the kitchen as a couple and Cole and Phoebe dancing the night away at P3.