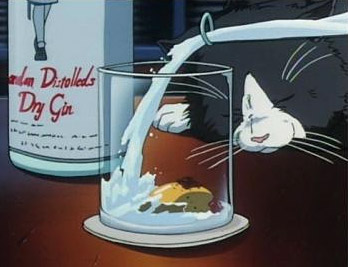 Spike likes his hideous hangover cure with gin.
"No, no, no," said the Dean. "This can't be right. Everyone knows a good hangover cure has got to involve a lot of humourous shouting, etcetera."
— Hogfather
Advertisement:

The only reliable cure for hangovers is time (for the body to get rid of the alcohol) and lots of water (to combat dehydration), but that doesn't stop fictional characters from trying all sorts of other methods to speed up the process. The Hideous Hangover Cure comes in two varieties, the first is something that will catapult you back into full sobriety within minutes, sometimes even seconds. The second variety is the one you take to stop feeling awful the next day.

Regardless of the intent, it's almost always a vile concoction, whether it's provided by a bartender or a well-meaning friend. To qualify for this trope, the cure must be effective (or at least the character proffering it must believe it is); otherwise this is just "let's play pranks with the drunk guy."

Note that "Hair of the Dog" (having a little more of the same stuff that caused your problem in the first place) does not count as an example of this trope, considering that it's not hideous at all, and is in fact mildly awesome. Some hideous cures may, on the other hand, include the hair of the dog. Hey, it's an excuse to be drunk while the sun's up!

Often involves Blazing Inferno Hellfire Sauce or Klatchian Coffee (Which can often do this on its own). Related to It Tastes Like Feet (because it usually does), Gargle Blaster (because it usually requires one), and I Drank What? (a common response from the subject afterward). Compare Raw Eggs Make You Stronger.

After Doc passes out from one drink, the barkeep has just the solution.

After Doc passes out from one drink, the barkeep has just the solution.