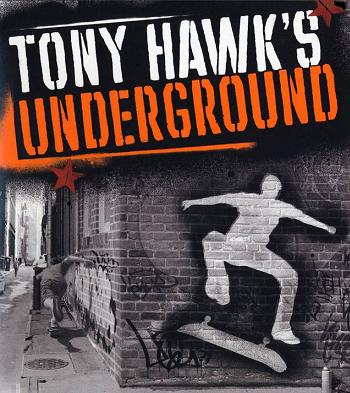 I gotta give it to ya', that run was bullshit. No, in a good way though.
— Bam Margera
Advertisement:

The first THUG was released for the PlayStation 2, Nintendo GameCube, Xbox, and Game Boy Advance, and followed the player character as they rise to stardom with their childhood friend, Eric Sparrow, then have a bitter falling out after Eric starts becoming jealous as the player character starts to leave Sparrow in his dust, before Eric gets drunk and hijacks a tank. It's funny, but still quite a bit Darker and Edgier and action-oriented than the rest of the series. A Windows PC port also exists if you're Australian.

The second game, Tony Hawk's Underground 2, takes place a year after Underground 1 and focuses on the World Destruction Tour, which is totally not similar to Jackass.note No, seriously; it's actually closer to Viva La Bam if anything. The celeb skaters (which are largely made up of people involved with Jackass) are divided into two teams and do dangerous and stupid stunts for points. The player character in this game takes a back seat to celebrity slapstick shenanigans as the tour takes him or her all across the world, to four continents in total.