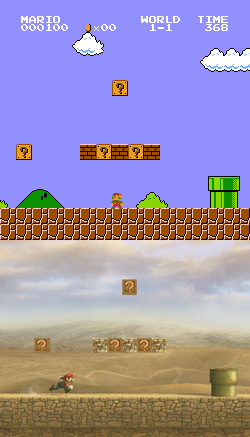 Above: 1985.
Below: 2008.
"Is it me, or is that place we were just in awfully familiar...?"
— Sonic the Hedgehog experiencing déjà vu, Sonic Generations
Advertisement:

A form of Stylistic Callback or Retraux Flashback in which a level or area in a video game is designed in such a way as to evoke memories of a previous game in the series. There are various ways in which this can be done: the level may simply use graphics or music from the original, or it may have the characters return to a location visited earlier in the series. In extreme cases, an entire level may be reproduced exactly using updated graphics.

Also, if a game has a Level Editor, even if it has no official nostalgia level, you can expect fans to make plenty of remakes of iconic levels from older games in its series, and even some complete Video Game Remakes. It's a common idea when originality is a bit low.

Compare Legacy Boss Battle, which is basically a Nostalgia Boss Battle; Video Game Remake, which is basically a Nostalgia Game; Megamix Game, where most or all of the levels are Nostalgia Levels; and Embedded Precursor, where an earlier game is included in its entirety. Often brings a series' protagonist back Where It All Began. See also Continuity Cavalcade. Contrast Recurring Location, which is a location reused for plot purposes. This trope can also be a factor in the production value/story if the production is good, popular, or well-known enough to warrant a Finale Production Upgrade.

open/close all folders
Nintendo
Pinball
Action Adventure
Advertisement:
Adventure Game
Beat 'Em Up
Collectible Card Game
Driving Game
Fighting Game
Hack-and-Slash
Platform Game
Puzzle Game
Real-Time Strategy
Rhythm Game
Roguelike
RPG — Eastern
RPG — MMO
RPG — Western
Shoot 'Em Up
Shooter — First-Person
Shooter — Third-Person
Simulation Game
Sports Game
Stealth-Based Game
Survival Horror
Turn-Based Strategy
Visual Novel
Wide Open Sandbox
Other Games
Game Book
Cranky Kong: I can remember when the original versions of these levels were shown off like it was yesterday. Back then, it was flat out impossible to have a Nostalgia Level; video games were a completely new thing, so every level had to be completely new as well. It was the Golden Age of game level creativity, I tell ya!
Feedback

At one point Sly and The Panda King have their minds connected, and Sly is taken back to the boss fight with Panda King from the first game.

At one point Sly and The Panda King have their minds connected, and Sly is taken back to the boss fight with Panda King from the first game.