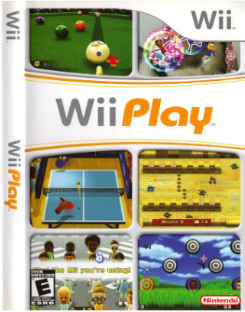 Wii Play. Do You?note Is that a threat?
Advertisement:

A party game sold with Wii Remotes, developed primarily to help new players learn the various means said controller could be used. Whether or not Wii Play became the Gateway Series Nintendo wanted it to be, it did manage to become the second best non-bundle selling game ever. There are nine different games: