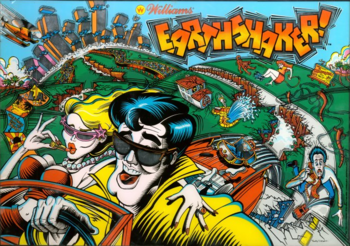 It's a Moving Experience!
"It's sunny drive time!"
Advertisement:

Earthshaker! is a 1989 pinball machine by Pat Lawlor with art by Tim Elliott, released by Williams Electronics.

The game casts the player as a researcher at the Earthquake Institute, and his task is to visit various Zones along the California-Nevada border where upcoming earthquakes are predicted to occur. After a while, tremors occur; take the Fault Trip, which will cause California to split from Nevada, allowing the pinball to get locked. Use another ball to keep visiting more Zones, and soon a full-blown Earthshaker occurs, starting three-ball multiball.

Fittingly, Earthshaker! is the first pinball game to include a shaker motor that caused the table to vibrate during gameplay. The first 200 units even had the Earthquake Institute building sink into the playfield during multiball; however, the feature proved too costly, and was discontinued in later units, making early versions of Earthshaker! quite the collector's item.

A digital version was formerly available for The Pinball Arcade until the license to all WMS tables expired on July 1, 2018.