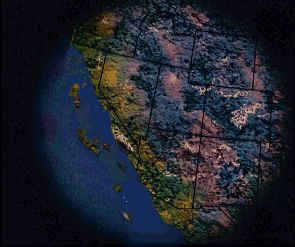 Learn to swim; see you down in Arizona Bay...
"But, assuming we don't blow ourselves up, us Californians just have to worry about California breaking off from the United States...to go hang with Hawaii. Alaska can come too."
— "The End of the World"

runs across much of California, as do other smaller fault lines, and consequently, earthquakes are common in the region.

Scientists have warned for some time that a superquake on the West Coast ("The Big One") is inevitable. All research points that there's enough pressure for it to happen any day it likes now, and there's a 70% chance that it won't wait more than 30 years. Many people have gotten the impression that California is one earthquake/nuclear explosion/meteor impact away from snapping off (neatly at the state line) and falling into the Pacific Ocean. In speculative fiction, don't be surprised if part or all of California has suffered this calamity, whether it's the focus of the work, part of a cavalcade of worldwide natural disasters, or just a throwaway reference. To writers who have Horrible Hollywood in mind, it's good riddance if Los Angeles were to fall off the face of the earth. Or religious apocalypticists who see it as a modern-day Sodom and Gomorrah.

In Real Life, this is not going to happen, at least not as portrayed in fiction. An earthquake on a "thrust" type fault can cause the land on one side to rise or sink by several meters (although thankfully, such gigantic movements are extremely rare). However, the San Andreas Fault is a "strike-slip" fault, which moves the land sideways at a very gradual rate, with the west side of California drifting northwest and the east side moving southeast. In fact, there are places where it's getting closer together. A San Andreas Fault quake won't cause the land to sink, although several land portions that run on top of the fault line are below the sea level, so it's conceivable that very long periods of time could see it break off from the mainland and become an island.note To see what 15 years of tectonic movement does to the asphalt on one country road, go here

Some writers propose that though the California coast would not crumble into the Pacific Ocean from an earthquake, it might be washed away by a following tsunami. While the Japanese Earthquake-Tsunami has shown this is possible even with strike-slip faults, it's not very likely.

A subtrope of Artistic License – Geology. If portrayed onscreen, it will usually use Earthquakes Cause Fissures, but may be more justified depending on the circumstances. A regional-scale Apocalypse How.