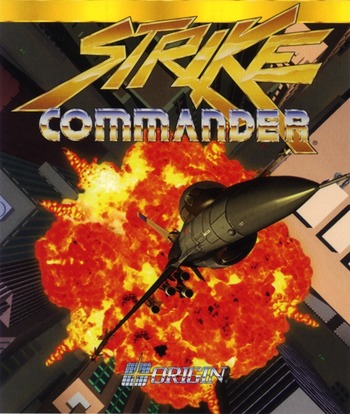 Released by Origin Systems in 1993, Strike Commander is a plot-oriented F-16 Flight Simulator that follows in the footsteps of the successful Wing Commander series.
Advertisement:

Set in 2011, the world has taken a turn for the worse. Global oil crises in combination with the rise of terrorism and the fall of the Soviet Union spark a series of nationalistic uprisings in some of the larger union countries (including Great Britain and the United States!). The abundance of warring nations have prompted the creation of mercenary military groups who conduct large-scale military operations on behalf of anyone who can afford them. Turkey in particular has created a "tax umbrella" for mercenary activity, and Istanbul is now considered the base-of-operations for many such groups.

The player takes the role of a Commander in one of the smaller but most elite mercenary groups, the "Wildcats", who specialize in aerial operations - especially F-16 fighter jets. After conducting several combat missions for various small organizations at the start of the game, the Wildcats receive a lucrative offer to fight for a South American dictator against his "troublesome" neighbours, and they reluctantly accept. However, after completing their mission, after treachery against the Wildcats It's Up to You to lead the crippled Wildcats forward, trying to survive both physically and financially in a complicated world.

As mentioned earlier, much like its Wing Commander predecessors the game has a strong emphasis on the plot. Between missions you can spend some time walking around your base and having conversations with other (well-characterized) members of your group - most of whom are also your wingmen and display various personalities in their flying styles as well. In the CD-ROM version of the game, each character is also fully-voiced, and in total there is more than an hour of conversations and cutscenes to be enjoyed. As the leader of the group, you also have to make sure that the armament inventory is fully-stocked with the missiles and bombs necessary for your next mission. Finally, in Istanbul you can drive down to the local Mercenary cafe to seek "fixers" - representatives of governments or other organizations who offer contracts for your employment. Once a deal with one of the fixers is made, the Wildcats fly off to whatever zone of conflict across the world, and then preform a series of missions for their employer.

The management side of the game forces the player to make tradeoffs between expensive advanced weaponry such as laser-guided bombs, all-aspect IR missiles, long range radar-guided missiles and guided anti-tank missiles which make missions much easier but are hard on the budget and cheaper unguided bombs, older versions of missiles that only lock on the the rear of enemy aircraft and direct cannon fire that require more skill to use effectively. It was entirely possible to get a Non Standard Game Over by failing to keep the financial side of the business in the black.

During the course of the game, the player learns more about the geo-political situation, about the rival mercenary groups that compete against you for work, and about the truth behind the fate of the previous leader of the Wildcats. The plot culminates in combat against the most powerful rival group, the Jackals, with whom the Wildcats have a long grudge as well as ideological differences: One group will do everything for money, while the other at least tries to work only for those who deserve it.

As a flight simulator, Strike Commander is more arcade-like than realistic, and can be compared to what Wing Commander would be like in atmospheric conditions. However, at the time it offered a ground-breaking 3D flight engine coupled with stunning VGA visuals (for 1993), which included advanced gouraud shading coupled with polygon textures. It was compatible with several different kinds of advanced joysticks as well, and was commonly included with Sound-Blaster/Joystick packages sold around that period (when the Sound-Blaster 16 had its own Joystick port).

The game was less successful than the Wing Commander series, in spite of its technical innovations. Nevertheless, it did produce an Expansion Pack called Tactical Operations. The expansion had a somewhat-irrelevant over-arching story about Turkey's attempts to raise its mercenary umbrella tax, but was mostly just a collection of short, ever-more-difficult campaigns with a relatively low Story to Gameplay Ratio compared to the original game. The major innovations in the expansion were the inclusion of the F-22 Raptor jet-fighter as an integral part of Wildcat operations (used in pure air-to-air interception missions), and a new pilot (with barely any new dialog) to replace Lyle Richards.

The game also opened the way to another flight simulator from Origin, called Pacific Strike, which took the same game engine into the Pacific Theatre of World War II.