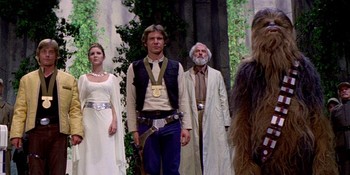 Gotta have those shinies!
For over a thousand years, Roman conquerors returning from the wars enjoyed the honor of a triumph, a tumultuous parade. In the procession came trumpeters and musicians and strange animals from the conquered territories, together with carts laden with treasure and captured armaments. The conqueror rode in a triumphal chariot, the dazed prisoners walking in chains before him. Sometimes his children, robed in white, stood with him in the chariot or rode the trace horses. A slave stood behind the conqueror holding a golden crown and whispering in his ear a warning...that all glory is fleeting.
— Patton

This trope is about an event where a local populace holds a celebration to honor a hero (and his/her team if he/she has any) for his good deeds and triumphs.

There would be too many examples from Real Life to list, so No Real Life Examples, Please!

Note: This is only for when the major heroic characters have a celebration held in their honor.