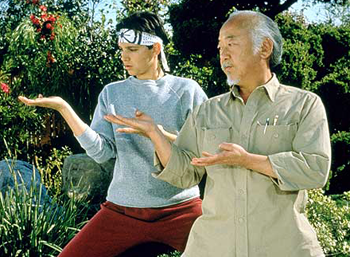 Obi-Wan: If you spent as much time practicing your saber techniques as you did your wit, you'd rival Master Yoda as a swordsman.
Anakin Skywalker: I thought I already did.
Obi-Wan: Only in your mind, my very young apprentice.
— Attack of the Clones
Advertisement:

A character who is in training for something, usually under some kind of Mentor. Since they're still learning, they are usually not good, but if the show is long enough, they'll improve. Their teacher might even hope from the very beginning that they might be able to surpass them at some point.

If they're in a movie, they'll improve after a Training Montage. Sometimes they have a chance of falling and becoming a villain, in which their former mentor will say they were A Pupil of Mine Until He Turned to Evil.

The life goal of some apprentices is To Be a Master.

The apprentice may have Opposed Mentors.

Related to The Squire. See Student and Master Team, when an older veteran trains a younger student to follow in his/her footsteps.

For Donald Trump's (or, if you live in the UK, Sir Alan Sugar's) TV Show, go here.