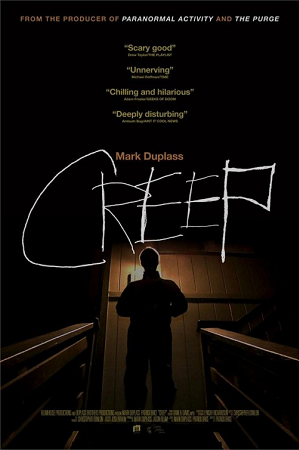 Creep is a 2014 independent found footage psychological horror film directed by Patrick Brice and starring Mark Duplass, who also co-wrote alongside Brice. The film debuted at SXSW 2014 before receiving a VOD release in June 2015, eventually receiving a wide release via Netflix a month later.

Aaron (Brice) is an optimistic videographer that decides to come work for Josef (Duplass) after answering his ad on Craigslist, promising an easy $1000 for a day's shooting. Josef tells Aaron that he'll be recording a series of videos for his unborn son, as he's suffering from a terminal illness and will never be able to see him grow up. While Josef seems strange, the money is too good for Aaron to pass up and he agrees to the task.

However, as the day progresses, Josef becomes increasingly strange, and Aaron finds it difficult to tell whether or not some of the things Josef is saying or doing are truly jokes or actually a sign of true danger and mental instability.

A sequel, Creep 2, was released in late 2017, going through a similar release route as the first film. Creep 3 is currently in production.

Not to be confused with the 2004 British film Creep.

There are unmarked spoilers ahead, so proceed with caution.