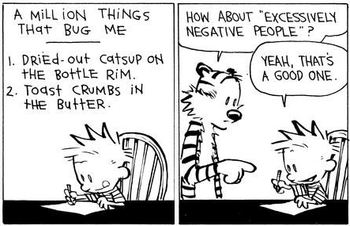 After hearing Bob complain for so long, Alice will begin to complain about his complaining.

Complaining about complaining is an interesting phenomenon that happens when one group becomes fed up with the complaints of another group and begin to gripe about the latter griping. While it tends to be used mainly for humorous purposes because of the cycle, it may also show the cycle that comes with it while also showing how the characters react in certain situations. Everyone has limits to what they can tolerate and hearing someone complain about something so long can cause them to complain.

This of course can be played more seriously if the complaints are legitimately something the audience and or most characters would be concerned about, only to be shut down by the other party. This could showcase declining relations or growing apathy.