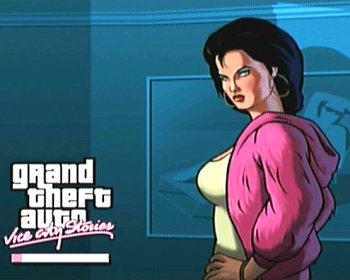 Grand Theft Auto games give you both a progress bar, and pretty pictures.
Come and take a peep at all these loading screens;
And tell me have you seen
All that the load can bring?
Just a little somethin' while the cartoon loads,
Watch a looping animation that you can behold!
— Coach Z

In Video Games, loading new data such as the next level takes time. Just throwing up a black screen during the process might cause players to think the game isn't working. In order to prevent this, the loading screen was born. It might be as simple as the word "Loading" on the black screen or might include colourful animation or progress bars to show that, "no really, the game is working on something right now..."

As games have grown larger, more complex and more detailed, loading times have increased in many games. This began in earnest with the original PlayStation thanks to the data having to be copied from the disc, which was much slower than the preceding cartridge-based systems. This resulted in the creation of loading screens to let the player know the level is being, well, loaded. Some of the possible features are:

Of course, improvements in technology have also helped reduce and even eliminate loading times, and therefore loading screens. Many games constantly stream new content during play so that players can explore large levels with no loading screens interrupting play, albeit at the cost of a massive loading screen on startup. This doesn't work as well as it used to as players quickly caught on to why they're there, but they're functional nonetheless.

Then, starting with The Ninth Generation of Console Video Games, Solid State Drives came as standard on the PlayStation 5 and Xbox Series X|S. These enabled developers to reduce load times from two minutes to only a few seconds, meaning the loading screens appear for only an instant. This presented an interesting situation for games on both these and The Eighth Generation of Console Video Games, which do need loading screens. Usually the solution is to let them be, but some games get creative by making them opt-in. For example, Spider-Man Remastered lets you keep the amusing subway ride loading screens in the options menu, while Horizon Forbidden West lets you enable a button prompt to manually confirm the return to gameplay, so you have time to read the tips at your leisure.

Loading screens can also be found in Flash animations. If they go for too long, it results in Loads and Loads of Loading.

The loading screen of Grand Theft Auto IV moments after booting up the game.

The loading screen of Grand Theft Auto IV moments after booting up the game.