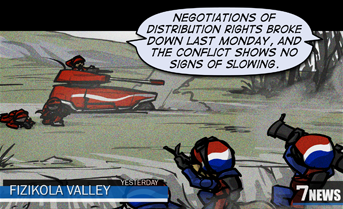 "There were several ways to win a corporate war. One of them was to bring out the bazookas."
— Flavour text of the Corporate War card, Android:Netrunner
Advertisement:

One common feature of Mega Corps and Predatory Businesses, both real and fictional, is the possession of private armies and the ability to wage war.

A staple of Cyberpunk media. Megacorporations typically are depicted as having "Company Security Forces" which are often as powerful as the military of a small nation. Besides the option for open warfare, they also heavily indulge in covert operations against their business rivals, ranging from espionage to sabotage and "wetwork", meaning assassinations of key personnel.

In Real Life, the East India Trading Companies officially conquered and outright governed large areas of India in the name of their home nations.

Compare Mob War. Contrast to One Nation Under Copyright, where the corporations literally are nations. May involve an Army of Lawyers or Corporate Samurai. Private Military Contractors are a common choice for such security forces. May overlap with N.G.O. Superpower. If one company attempts a hostile takeover of another, it will likely invoke Majority-Share Dictator.