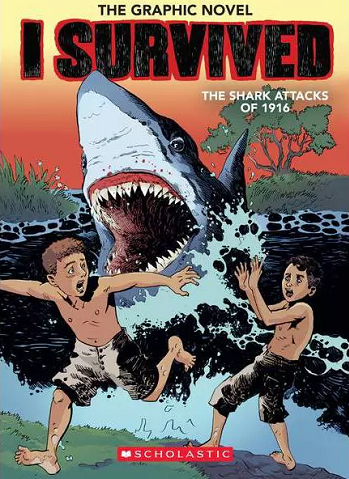 Nope, not safe to go back in the river.
"Everyone's always in favour of saving Hitler's brain. But when you put it in the body of a Great White shark, ooh, suddenly you've gone too far!"
— Professor Farnsworth, Futurama
Advertisement:

Compare Sea Monster (for other scary things in the ocean), Never Smile at a Crocodile and Pike Peril (for the rivers-and-lakes counterpart), Monstrous Seal, and Bears Are Bad News. You can relax if there are Devious Dolphins though, since they make perfect rivals to these sharks.

Ironically, sharks are nowhere near as dangerous as the stereotype makes them out to be. Hundreds of people have been attacked and killed over the last few centuries. That sounds like a lot, but put it compared to the tens of thousands of fatalities to large felines, bears, wolves, and plenty of domestic animals and it becomes positively puny. A vast majority of shark species are harmless to humans, with just a handful of species that have been documented to kill, and even then only two (bull sharks and oceanic whitetip sharks) are consistently dangerous. Even the infamous Great White, a shark specially evolved to feed off mammals, are remarkably good tempered and ignore people on all but freak incidents. The rate of shark attacks and deaths average out to about a couple of deaths a year globally, making them less dangerous than elephants, jellyfish, domestic animals like horses and dogs, and the common staircase. In fact, some sharks are surprisingly intelligent and social animals, rather than the mindless carnivores they're portrayed as, and they've taken on a diversity of habitats and body designs beyond the usual torpedo shape.