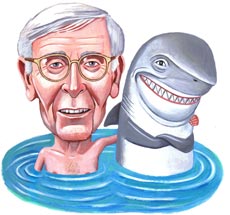 The man who loved sharks.
"Everything I've written is based on something that has happened to me or something that I know a great deal about."
Advertisement:

Peter Benchley (May 8, 1940 – February 11, 2006) was an American author, whose work focussed on marine creatures and human interaction with them, often with a dose of horror on the side. He is best known for being the author of the novel that Jaws was based on, though he also wrote several other books.

Later in life, Benchley became a conservationalist, and attempted to educate people about sea life, and the impact they were having on it. He especially tried to get sharks protected (great whites are now protected in California and South Africa, two of their main strongholds) to undo the damage caused by Jaws. He died in 2006 of pulminary fibrosis.

Benchley was the son of author Nathaniel Benchley and the grandson of humorist and sometime actor Robert Benchley.

Works by Peter Benchley with their own trope pages include:

Other works by Peter Benchley provide examples of: