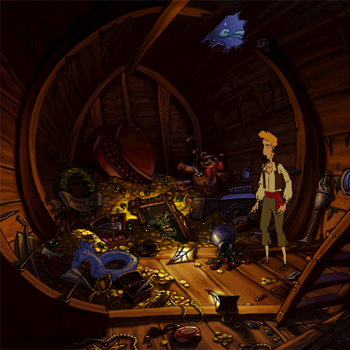 Whoa. Now that's a whole lot of booty to grab.
Sissy Pirate: Uh, captain? Captain? I know we usually bury the treasure, but what if, this time, we use it to buy things? You know… eh… things we like?
Captain: [shoots him, then looks at his other men, who furiously begin digging a hole] Ahhr! We'll dig up the treasure in seven yarr. I've drawn a map on this cracker, which Polly will hold for safe keepin'.
— The Simpsons, on why there is treasure buried everywhere.
Advertisement:

In media the goal of every pirate is to plunder shipping for the large wooden chests overflowing with gold, jewels and other valuable trinkets invariably carried by every vessel on the high seas. Mundane cargoes carried in the ships' holds are completely ignored as cackling buccaneers make off with their ill-gotten riches, which they then buried or hid in a cave on a remote island, with only a Treasure Map to remind them of the location.

The reality of piracy was a lot more pragmatic. Food, fresh water, weapons and ammunition, timber, ropes, and sails were all of more immediate value to the corsair than a chest full of gold (which, if they ever got any, would promptly be spent on food, fresh water, weapons and ammunition, timber, ropes, and sails, with what was left going to drinking and whoring before they got caught and hanged). These things kept their ships and crews operating outside the reach of the law. In addition, very few cargo vessels carried that kind of wealth. Those that did were warships sailing in groups with enhanced security to fend off any pirates that might attempt an attack. (Certain, more mundane-looking cargoes, mind, might be more valuable than we would think of today—alcohol, fabrics, spices, and various "exotic" items from extremely far afield) Furthermore it was much easier to fence cargo goods than gold and jewels, and even if a pirate found such treasures they might not even understand the value of the items. In one famous case a pirate smashed a large diamond with a hammer because a crew mate got numerous smaller diamonds as his share. Feeling cheated, he smashed the diamond into numerous smaller pieces to make it seem like he got the same amount!

Furthermore, pirate ships probably didn't have space for huge chests: real pirate ships were often very small and fast, although a few of the more successful and grandiose pirate captains got quite big ships.

Pirates sustained themselves and their vessels by using supplies and cargoes plundered from their victims and selling what they had no use for. This provided the coin for obtaining things they couldn't steal, paying their crews and spending a raucous night enjoying the pleasures of a seedy port. Also, given the fact that piracy was a very high-risk career, there also wasn't much point in caching loot for the purpose of digging it up later: most of them would end up sunk, killed in a boarding action, or hung long before the planned time to retrieve the treasure came around, so there was no real incentive to not spend it at the first opportunity.

But as they say, behind every story is a grain of truth. The idea of pirate gold most likely arose from the "Treasure Fleets" used by the kingdom of Castile-Leon to transport the silver mined in Mexico and Colombia (90% of it from just one mine in Potosi, Colombia) to Seville. On one notable occasion in the 16th century the fleet was scattered by a cyclone, and several ships were picked off by English privateers and Dutch sea beggars, both officially sanctioned by the English government and the Dutch resistance, respectively. Even today, sunken treasure ships are highly sought after by modern treasure hunters. Additionally, the passengers on ships typically carried money in the form of gold or silver, in small quantities.

The greatest amount of pirate treasure is said to be on the Swedish island Gotland in the Baltic Sea. Though obviously not the Caribbean type of pirates, generations of vikings buried treasure from their raids to Northern and Eastern Europe and the Black Sea there.

See also Inexplicable Treasure Chests what be buried on a Desert Island in The Spanish Main.

Has nothing to do with that kind of "Pirate Booty".