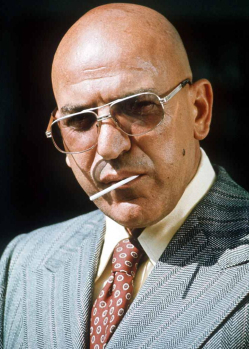 The lollipop was a cigarette not too long ago.
"I tried to give up cigarettes. I bought a book on addiction. Apparently, if you're addicted to something, when you give it up you replace it with something else. Like a hobby. So I did a pottery course. First day, everyone made ashtrays."
— Steve Hughes

This character is an alcoholic or other addict, but now they're on the wagon. So they take up some other habit to distract them from their cravings. Standard replacement habits include coffee or cigarettes (to replace alcohol) and gum or binge-eating (to replace tobacco).

This is Truth in Television; a habit becomes routine, and kicking the habit becomes much easier when you form a new routine (e.g., instead of rolling a cigarette, you open a pack of chewing gum). For more serious addictions, this may be even more true: according to some neurological schools of thought, when the brain becomes truly hooked on pleasure-causing chemicals released either due to a physical (e.g., drugs) or emotional (e.g., gambling) stimulus, it becomes virtually impossible to abandon that stimulus without consciously or subconsciously replacing it with another that produces a similar or better result.

Conveniently, such alternative addictions are also often narratively useful, as they allow portraying a character with an addiction that is neither completely crippling nor entirely an Informed Flaw, and can also provide a justification for treating a G-Rated Drug like a real one.

In situations Played for Laughs, it's not unusual for the substitution to 1) switch a mild drug for a worse drug, 2) cause the same kind of reactions even if it's supposed to be "healthier" or 3) Not really help put the addict's mind off the cravings.

Blaming his alcoholism for his father's death, Peter vows never to drink again. Almost immediately, he finds something new to become addicted to.

Blaming his alcoholism for his father's death, Peter vows never to drink again. Almost immediately, he finds something new to become addicted to.