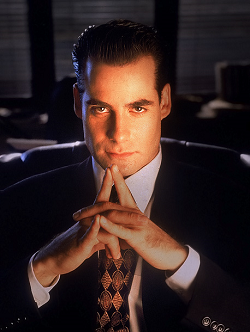 Jim Profit: A Name You Can't Trust.
"Gracen & Gracen, spearheaded by its aggressive acquisitions policy, has a capital base of $14.8 billion, making it the fifteenth largest corporation in the world and a very exciting place to work, especially if you're willing to put in that extra time and effort it takes to get ahead. And there's plenty of room for career advancement as well, if you know what you want. I want to be President of Acquisitions."
— Jim Profit
Advertisement:

Aired (and quickly yanked) by Fox back in 1996, Profit told the story of Jim Profit, an immaculately-groomed, sandpaper-voiced sociopath with a twisted Backstory, who was making his way up the corporate ladder of Gracen & Gracen Enterprises through a series of Machiavellian schemes.

The show was created by David Greenwalt (Angel) and John Mc Namara (Lois & Clark). It was meant to be a modern take on William Shakespeare's Richard III: the show centered around Profit's quest for advancement and the employees within the company who, realizing his true nature, try to get him arrested or (worse) fired.

Special note should be given to the narration by Profit in each episode: it's done in a cheerful, inspirational, corporate-cliche-ridden style, which subverted as hell by his bribery, extortion, incest, kidnapping, identity theft, and the occasional murder.

Although the show was critically acclaimed, the series died a quick and sudden death because of low ratings. Only four of the eight episodes (seven hour-long episodes and the two hour pilot) aired in America, its country of origin; the complete series would air in Europe (it was particularly well received in France).

This series has been singled out as being way ahead of its time. Later shows, such as Breaking Bad, The Sopranos, The Shield, and Dexter, proved that there was a market for sophisticated dramas about villainous protagonists.

Compare to Showtime's Dexter, a more recent and far more successful show which has been likened to Profit in its questionable morality and use of voiceover, through Dexter's voiceover narration.

Also notable as the last series to come from Stephen J. Cannell Productions (although the great man didn't create or write any episodes of this one). The show's co-creator, David Greenwalt, would go on to work as an exectutive producer on Buffy the Vampire Slayer and co-create Angel with Buffy creator Joss Whedon, as well as co-creating and producing Grimm.

"Goodnight."note The very last line of the Series Finale.