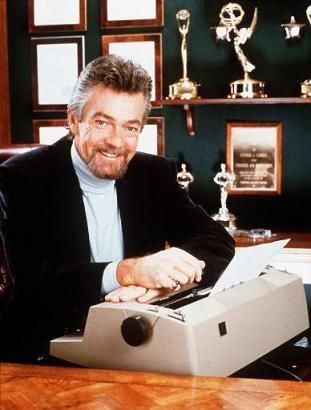 "(Stephen J. Cannell) still gets branded Johnny One-Note (yet has anyone ever noticed any similarity between The Greatest American Hero and Baa Baa Black Sheep except that both involve flying?)."
—The Los Angeles Times
Advertisement:

Stephen Joseph Cannell (February 5, 1941 – September 30, 2010) was the creator or co-creator of such TV shows as The Rockford Files, The A-Team, The Greatest American Hero, Hardcastle and McCormick, 21 Jump Street, and The Commish. Suffered from dyslexia. Famously appeared in his Vanity Plates on a typewriter and also as the on camera host of

Scene Of The Crime and U.S. Customs Classified; he also acted several times, most notably as the Big Bad on Renegade (another series from his company), and was a novelist.

Also played poker with a fictional crime writer. He died in 2010; his seat, chips, and whiskey remain at his spot to this day. (Cannell has a posthumous executive producer credit on 21 Jump Street and its sequel; he also helped produced some movies when he was actually with us, such as the movie version of The A-Team and The Poker House.)

Series from Cannell (created or co-created by, except where noted with an asterisk):