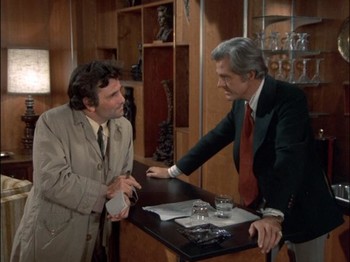 "Double Exposure" is the fourth episode of the third season of Columbo.

Dr. Bart Keppel (Robert Culp, in the third of his four appearances on Columbo, the first three as the murderer) is an expert in the field of "motivational research", namely, how to use advertising to get people to buy things. Among other things, he is a pioneer in the use of Subliminal Advertising, the insertion of single frames of images into films in order to subconsciously influence people to buy a product. For example, inserting a single frame of a bag of popcorn into a movie will lead moviegoers to buy popcorn at the concession stand.

Keppel is showing a motivational film to one Vic Norris, a businessman and client. Norris is pretty pissed-off at Keppel, because Keppel has tried to ensnare him into blackmail via the use of a Honey Pot named Tanya Baker. Norris isn't cooperating, however, and has threatened to go to the police to report Keppel's blackmailing. So Keppel kills him, by using a combination of some extra-salty caviar and a subliminal insert to make Keppel thirsty during a film Keppel is demonstrating, and then shooting him in the chest when Norris exits the screening room to get water (with his alibi that he's providing narration to the film).

He has two problems, though. First, there's the projectionist, Roger, who saw Keppel monkeying with the hall monitor and eventually figures out that Keppel killed Norris. Secondly, there's Lt. Columbo, who notices the usual niggling details (if the killer came from the street outside, how would they know when Norris was leaving the screening room?), and begins to zero in on Keppel.