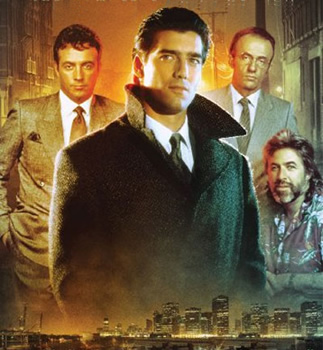 This page is about the show. If you were redirected here from a link referring to a member of the mob, see The Mafia.

An American crime drama series that ran on CBS for four seasons (1987–90), starring Ken Wahl as Vincent "Vinnie" Terranova, an undercover agent for the OCB (Organized Crime Bureau), a fictional division of the FBI. A major theme was the constant ethical dilemmas faced by the protagonist, who had to befriend criminals with the eventual intention of betraying them.

Created by veteran hit producer Stephen J. Cannell and Frank Lupo (yes, the same pair responsible for The A-Team), Wiseguy veered from the traditional "bad guy of the week" police procedural by breaking the drama into multi-episode Story Arcs that followed an infiltration — and its charismatic criminal target — to its logical conclusion, no matter the cost to criminal, innocent civilian, or cop (though there were standalone Breather Episodes in later seasons, mostly dealing with the personal lives of the characters). The show influenced writers like Chris Carter, Joss Whedon, and David Simon to build on the trope of showing both sides of the morality play in humanizing detail.