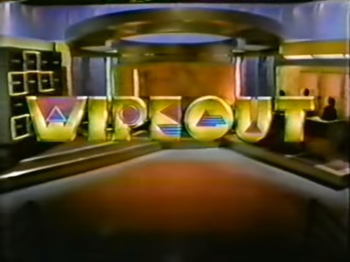 From Paramount Studios in Hollywood, it's television's most exciting new game, WIPEOUT!

Peter Tomarken's only syndicated Game Show, lasting only one season (1988-89). It was distributed by Paramount Television, and one of their few entries into the game show world (among others such as the final two years of the NBC run of You Don't Say! (inherited from Desilu) and The New Price is Right).

In Round 2, or the "Challenge Round

", the remaining two players would pick answers from the board, this time with eight correct and four incorrect. The winner of the first round started by stating how many correct answers he could give without hitting a Wipeout. The players would bid against each other until one of them either reached the maximum of eight or challenged the opponent to fulfill the bid. If the winning bidder did so without answering incorrectly, he won the round. An incorrect answer meant the opponent would have to choose one correct answer to win the round. If he failed to do this, the original player resumed trying to complete his bid. The first player to win two rounds won the game, a prize, and the right to play the Bonus Round.