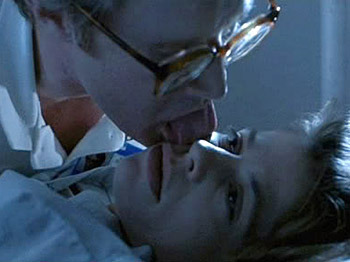 Well, that was creepy. And random.
"Just so we're all clear, what's going on back in the reality of the insane asylum is that orderlies are raping the shit out of us, right?"
— "Sucker Punch: The Abridged Script,"

Perhaps it's because a hospital environment makes people feel more than a little vulnerable, and anxious about whether their caregivers have their best interests in mind. Perhaps it's because anywhere but a hospital, an orderly's occasional job of subduing unruly patients would brand them as a bad guy's Mook. Perhaps it's a bit of classism at play where people are more mistrustful of working-class orderlies versus the solidly middle-class college-educated nurses and the downright aristocratic graduate-school trained physicians. Or perhaps it's simply Nightmare Fuel to imagine any medical professional turning bad, and it's orderlies who tend to catch the flack because we really, really want to believe our doctors and nurses are trustworthy.

Whatever the reason, many orderlies in fiction are depicted as petty or not-so-petty criminals, taking advantage of their patients and the trust of their hospital superiors (unless their superiors are just as bad, or worse). When he's not stealing patients' medication to sell on the street, any orderly who's not a faceless extra is bound to be rooting through their belongings for cash and jewelry. An orderly with lower tastes may procure drugs from hospital stocks for personal use, or secretly trade them to addicts under their care in exchange for sexual favors. The creepiest of all don't bother to barter, molesting or outright raping patients who are too drugged, restrained, unconscious or crazy to report the offense.